Most of the present Preserve was formerly part of the Garvie estate. Dr Thomas Garvie, one of only two physicians in northern Glen Cove, and founder of this prominent Long Island family, emigrated from Scotland to Glen Cove in the early nineteenth century. He was a well known businessman and had studied for the clergy, born on July 12th, 1775 at 3 p.m.


Details on his early life and education are unwritten, however an extract from the records of the Associated Presbytery of Perth, shows that in 1797 he was studying for the Presbyterian Ministry. For an unknown reason, he abandoned that direction, and in May of 1800 was appointed candidate for a diploma at the Royal College of Surgeons in Edinburgh.

The following document displays how rapid and how successful was his course of study:

A diploma was accordingly issued, an impressive document on parchment with a wax seal.

Dr. Garvie's oldest account book records his preparations for emigration to America. It includes a list of thirty-nine(39) "Letters for America entrusted to the care of Mr. Garvie Surgeon besides a few contained in his medecine chest." The recipients, chiefly Scotch judging from their surnames, resided in such diverse places as New York, Virginia, Pennsylvania, Maryland, South Carolina, Georgia, Vermont, Kentucky, and Nova Scotia. The same volume contains an inventory of "Household Furniture and goods belonging to Mr. Thomas Garvie, Surgeon," which, like the list of letters, was evidently made before his departure for America. Extract as follows:

The first American record of the doctor is situated in the Garvie Family Bible, which states that "James Garvie & Thomas Garvie, his only surviving son, arrived at New York in the Ship Pitt on the 27th Octr. 1803 from Greenock."

Dr. Garvie was perhaps an active physician from when he first arrived at Glen Cove until his death in 1842. The surviving volumes of his accounts, dating from 1800 to 1833, approximately all recorded in an archaic form of Moat shorthand which Dr. Garvie modified to his own use. But some of the records were written in English. One can deem these records to be very interesting and show the expenses of the time. A brief sample is as follows:


Dr. Garvie's property spanned along the North Shore of the Creek in Glen Cove, to the point that now bears the family name. Much of it is included in the present Garvies Point Preserve. The creek, opening on a wide, reed-lined harbor that gave Glen Cove its original name, was probably the community's first center for maritime activity, which must have been very extensive during the Colonial period. Dr. Garvie soon portrayed enthusiasm for developing his own maritime interests.

The bill did pass both Houses of the Legislature, and a certified copy was found among Dr. Garvie's papers:

Dr. Garvie was to erect his wharf within the next two years, which was to no avail because by 1831 William M. Weeks had already established a wharf company in Glen Cove and a steamboat landing had been constructed about a half-mile north of Dr. Garvie's property. Back in 1829 Captain Elijah Peck's Linnaues was the first steamboat to touch regularly at Glen Cove during the month of July, as such, Dr. Garvie was too late.


Dr. Garvie was a man of many scientific interests, and also was clearly anxious to increase the financial return from his own properties. These interests were combined to encourage the exploitation of his geologic resources, as the following letter shall prove.

The exact date that Dr. Garvie began selling this superior clay is unknown, yet he did manage to organize a commercial enterprise as can be seen from this business card:


To manufacturers of stone ware, Dr. Garvie and Son, residing in Glen Cove, Long Island, will supply the trade with clay, of a very superior quality, at the reduced price of $1 & 25 cents per load of 12 bushels.

The last reference in the documents of Dr. Thomas Garvie is a record from the Family Bible that says "Dr. Thomas Garvie died June 21st 184()."
The last digit was missing, yet cemetery records provide the date as being June 21, 1842. 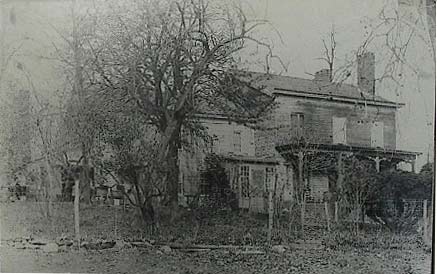 The Garvie house stood on the part of Glen Cove dubbed Garvies Point (formerly known as Sheeps-Pen Point). Along with 90 acres of land, it was inherited by Jesse Coles from his father, Joseph Coles, a descendant of Robert Coles, one of the original Patentees of Glen Cove. The next owner was James Garvie, Dr Thomas Garvie's father, who built a part of the house (preceding illustration) in the late 18th Century. Years had passed away and industrial expansion was missing from Garvies Point Road, which was scarcely used.
Eventually the old house was doomed into disrepair, and by the mid 1950s, it ceased to exist. The owners following the Coles and the Garvies were as follows: William MacKenzie, owner in 1898, who married Dr. Garvie's Daughter Hellen, LaFarge, and the Appleby families. Each family had enough wisdom not to ruin the land, and thus left it in the pure splendor that it is in to this day.